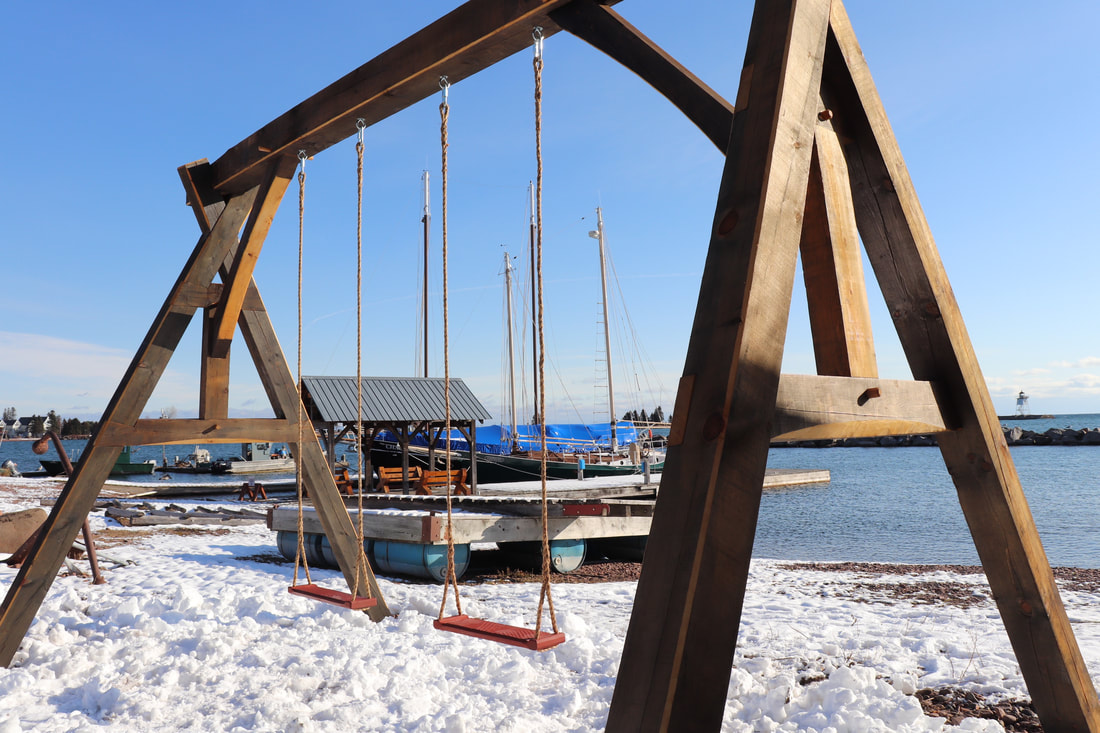 Wherever I am, I come to muse on the mundane and how impacted we are by the structures we dwell in and around daily. From floors to furniture, we find ourselves touching and being touched by these built surfaces. They play no small role in our tactile integration of the world, our social interactions, and our daily routines. Built spaces and surfaces have the power to be grounding, engaging, and stir within us a deep sense of belonging.

When deliberating on my “Slojd Project” -- I found myself mulling over the meaning of “slojd.” This Swedish term associated with handcraft was introduced to me at the start of the internship and quickly became part of my daily vocabulary.

My experiences at North House now lead me to define “slojd” as work (object or pursuit) that is clever, resourceful, and often joyful. Slojd, as I’ve come to know it, is simply playful problem-solving using whatever tools, skills, and materials are readily available.
I came to North House excited to deepen my material knowledge, expand my problem-solving toolbox, and continue studying shelter construction and building skills.

I was eager to delve deeper into timber-framing, carving, rope work, and rigging. I considered the technical skills I wanted time to practice -- designing a structure, chiseling joinery, carving texture, splicing and managing rope. During such divisive and anxious times, I wanted to build a structure that invited community and encouraged play.
​
With these ideas in mind, I proposed building a timber-framed swing set for campus using the folk school’s inventory of timbers leftover from past classes.​

I approached local timber-framer and bird-bowl carver extraordinaire, Mike Leoffler, with the idea. Mike told me he had dreamt of building playground equipment and was excited to help. We set about transferring my pencil drawing of the swingset into Sketchup to sort out the nitty gritty of the joinery and create workable plans. 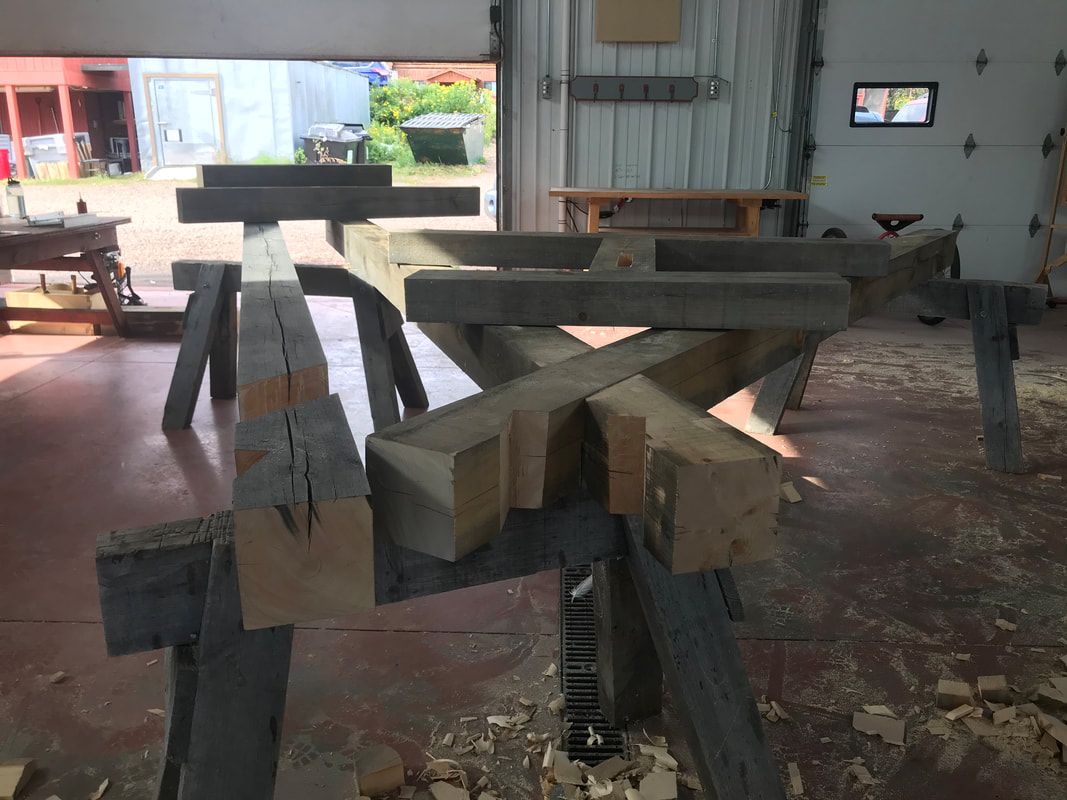 Over the course of the project I felt equally excited and intimidated. I remember many moments at the start of the build when Mike and I stood scratching our heads while laying out the timbers. And many more moments as I began to work alone when I stared at the dissected drawings struggling to assure myself that I used the right angle, marked the right line, and removed the right material. When all was said and done, would my playground puzzle fit together?
I spent the summer working on my timberframe in the center of campus. At the start, I felt a bit clumsy wielding a Japanese saw, mallet, chisel and slick. Now I feel more comfortable and more capable of cutting straight and chiseling smooth. I grew to love the sound of roughing out joints -- a chisel wedged between relief cuts to blast out chips or a sharp slick cutting across face grain. Although at first I was intimidated by the heft of the chain mortiser and router, I quickly developed a fondness for plunging mortises and routing housings with those highly efficient cutting machines. ​

When I wanted a break from heaving heavy power tools and rolling timbers, I shifted my attention toward cutting and shaping two wooden seats for the swing from timber offcuts. With gouge and drawknife, I carved curves, texture, and bevels. They are simple, quirky, and colorful. They are also deeply appreciated by a portion of the population who much prefer the “old school plank swing” to the uncomfortable plastic swing seats that squeeze your bum. This is something I learned while crafting in public this past summer. 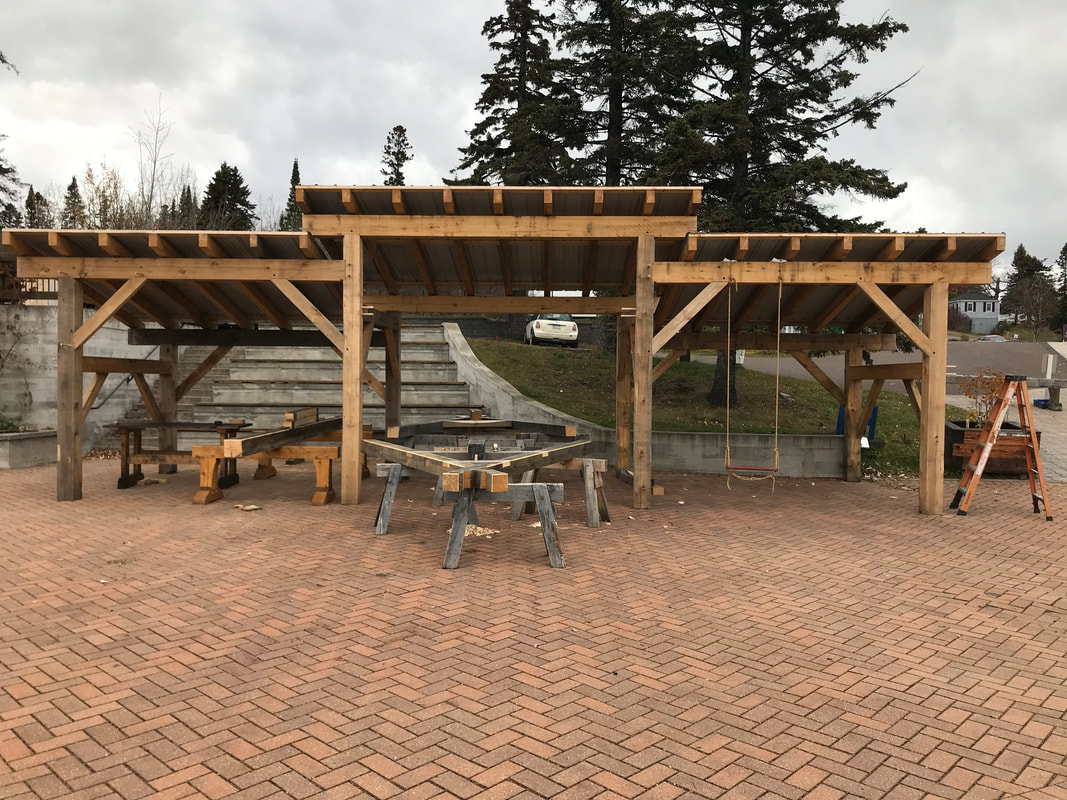 By participating in regular rope club meetings with Artisan in Development, Emily Derke and resident rope enthusiast, Ben Byron, I began exploring the wonders of rope. Our weekly meetings often stretched three hours long as we navigated the twists and turns of making rope from alkali and bacterial retted basswood. We twined strands by hand and experimented with a variety of rope-closing techniques using the North House ropewalk. We spent occasional meetings learning practical knots and practicing ropework such as end-whipping and eye-splicing that became useful skills for rigging the swings. 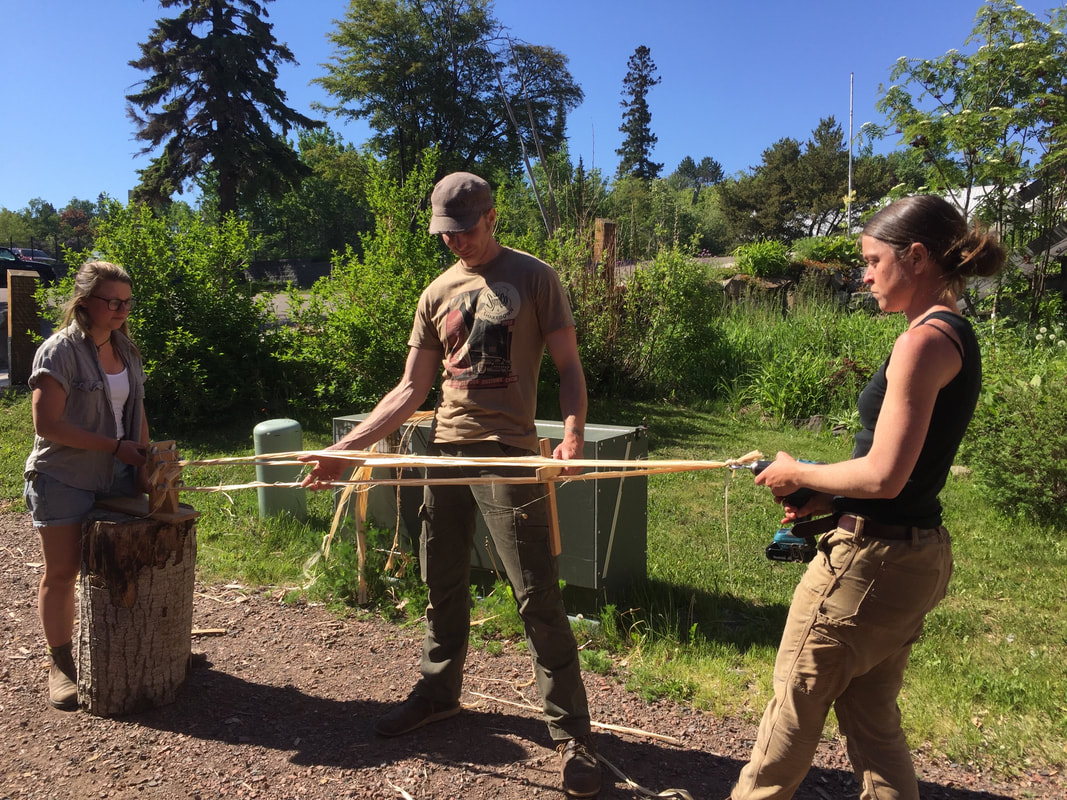 I rarely stay up past 10, but on a cold, clear night this September I found myself standing on a ladder at midnight rigging the first finished swing seat to the timber frame Peter Henrikson’s class built in July. Behind me a hardcore plein air painter worked with a headlamp. We weren’t the only ones on late night escapades. While tying bowlines around the beam, my fellow intern Jake wandered toward me from behind the blacksmith shop. A fox followed him. The fox trotted under the timber frame, around the sawhorses and stared up at me for a long, curious moment from the foot of my ladder.

I rigged this swing with ½” manila three strand rope. Reluctant to cut the excess line because of the temporary rig, I tied the loose ends underneath the seat with a square knot between a double fisherman’s. The book “Quipus and Witches’ Knots” by Cyrus Lawrence Day opened my eyes to the use of knots as mnemonic and magic devices across ancient cultures. I learned that the Greeks and Romans called the square knot the “Hercules knot” after its supposed inventor. They believed the Hercules knot to hold great protective and healing power and used it frequently to secure their garments.

There was a time when explorers kept records and calendars with a series of knots on a string, witches whispered spells into knots to control the winds of destiny, and sailors gave loose knots to fair maidens to tighten if romance reciprocated. The history of knots is steeped in rich symbolism and peculiar stories.
​
My desire to learn and practice the language of knots arose from my experience helping rig sails on the Hjordis transit and deckhanding on the sail boat through the summer. Having a range of rigging skills and knowledge of knots is incredibly practical across construction trades, and I am excited to keep exploring this area of craft.
I was happy to see North House staff, students, and strangers so eager to play on the temporary swing. People of all ages seemed drawn to the swing. One morning I saw two little girls sitting side by side giggling while their mother pushed them. Later that day I glanced over from the dock to see an older woman pumping her legs giddily while her white pony tail trailed behind her. 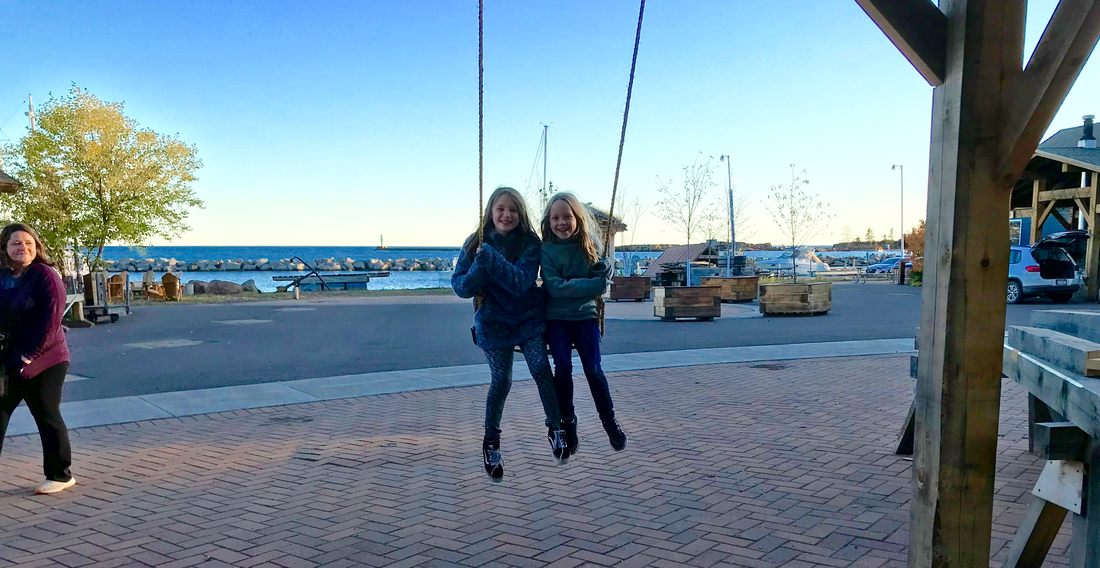 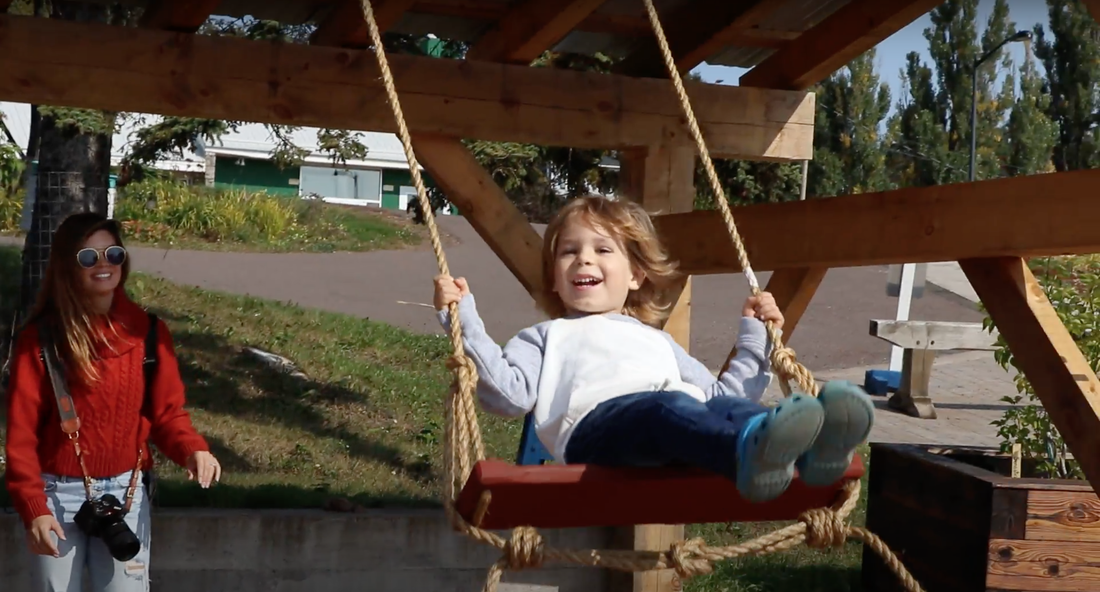 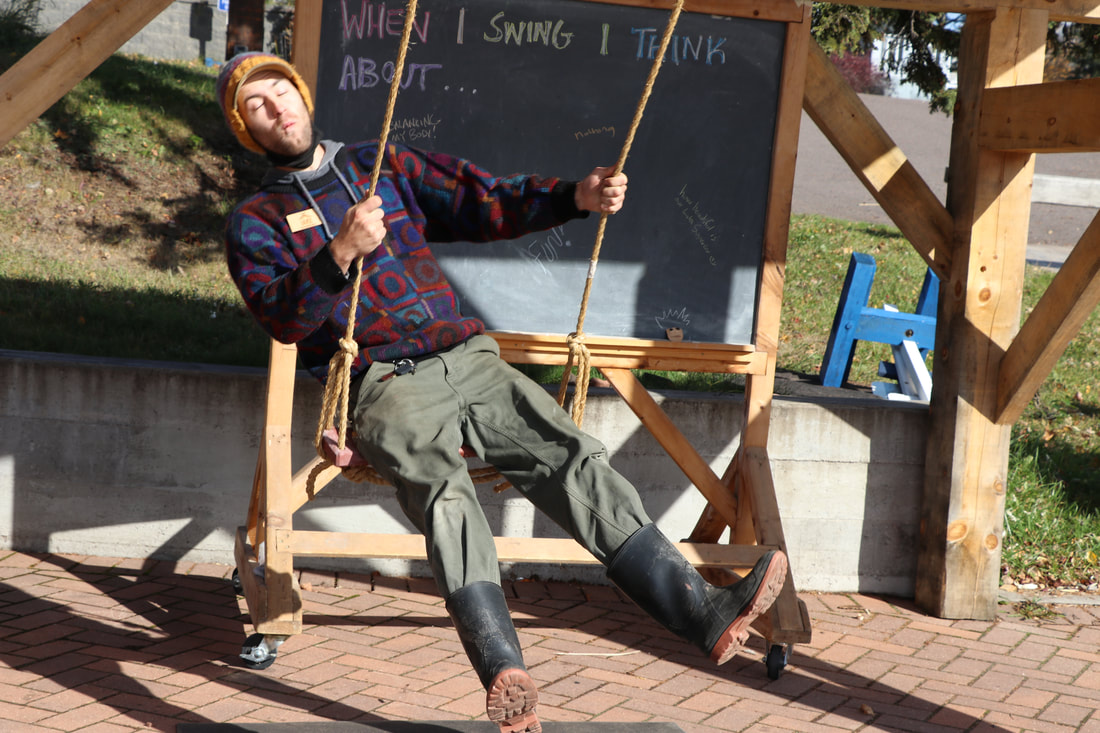 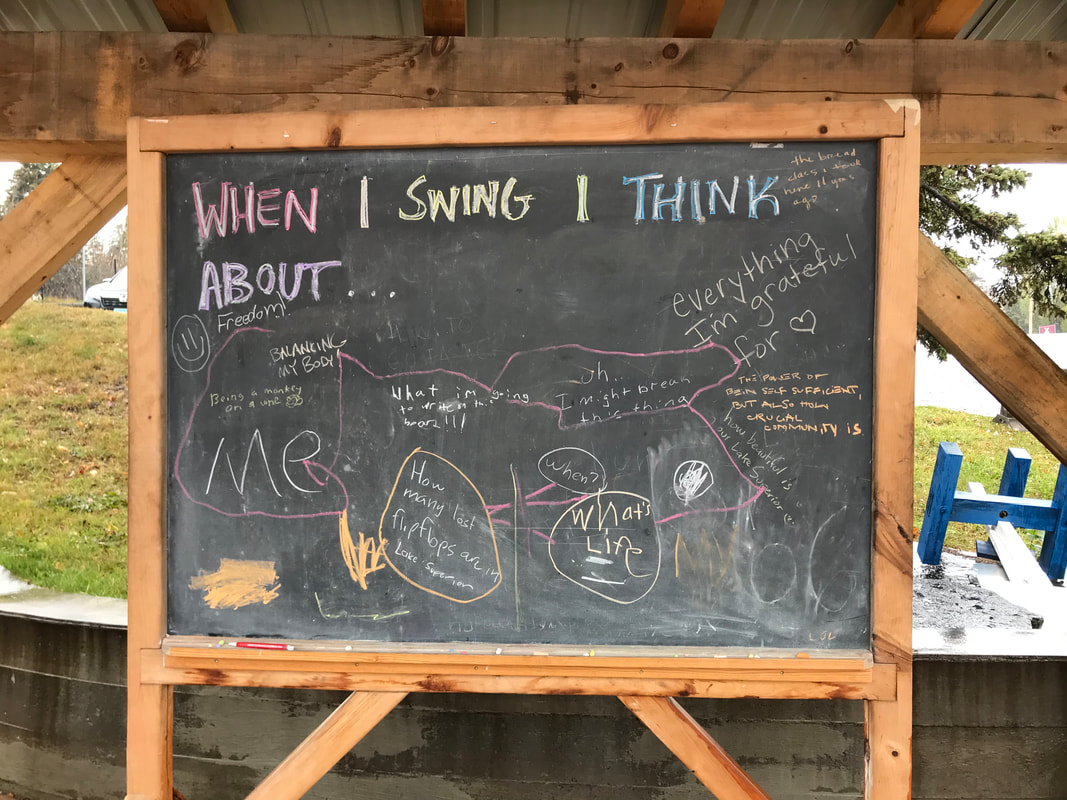 After many hours spent chipping away at the frame, the day for the raising finally came. Mike arrived in the afternoon and we corralled a few extra sets of hands to help. Mike Ulen, Matt, and Amir held up the two canted A-frames while I commandeered the forklift to hoist the 8x8 beam 10 feet in the air and set it into place.
​
It took a bit of convincing, but Facilities Manager, Matt Nesheim, finally agreed that as a “facilities focused” intern I could learn to drive the forklift and gave Mike Ulen the OK to train me the day before. Quite timely.

It is difficult to describe the strange pleasure I felt at the helm of the forklift, lifting and lowering the beam that bridged all parts of my swing set puzzle -- the keystone of my creation. 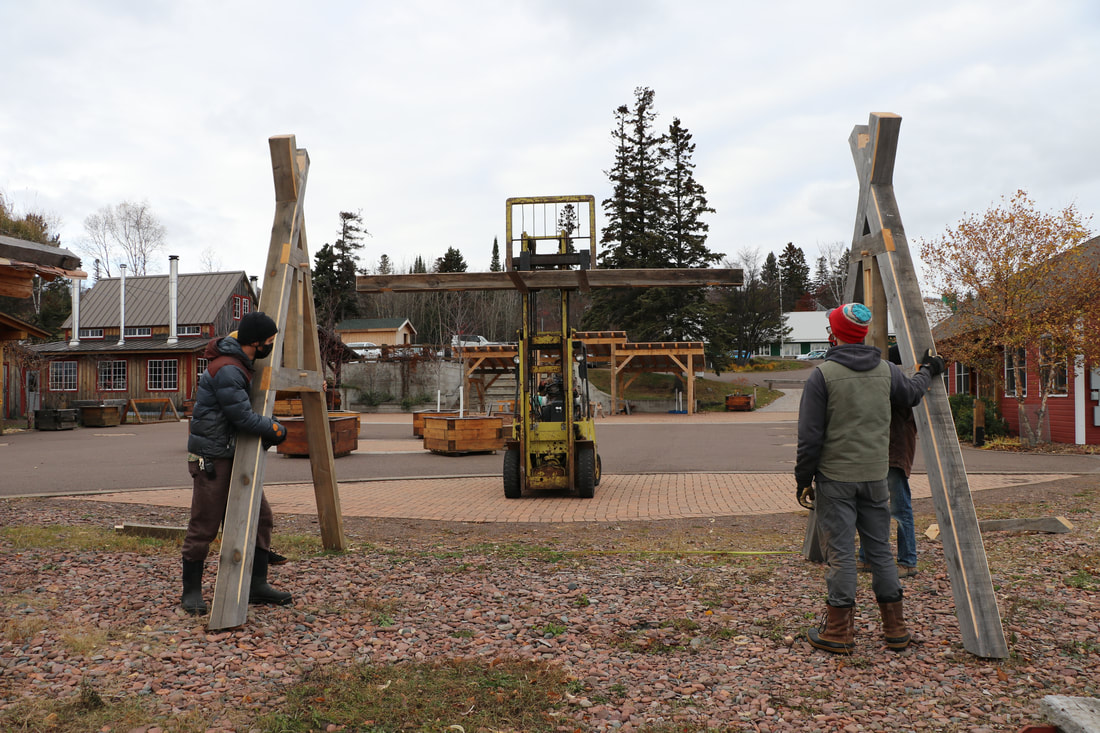 Witnessing the community effort of the raising brought me almost as much joy as driving the forklift. I watched and listened closely as Mike L. guided us through the excitement and tension of the raising with his incredibly patient and pleasant way of problem-solving. This moment made me particularly grateful for his mentorship. After some finagling we got the knee braces in place, I drilled holes through the beam and pounded in pegs to secure the tenons. 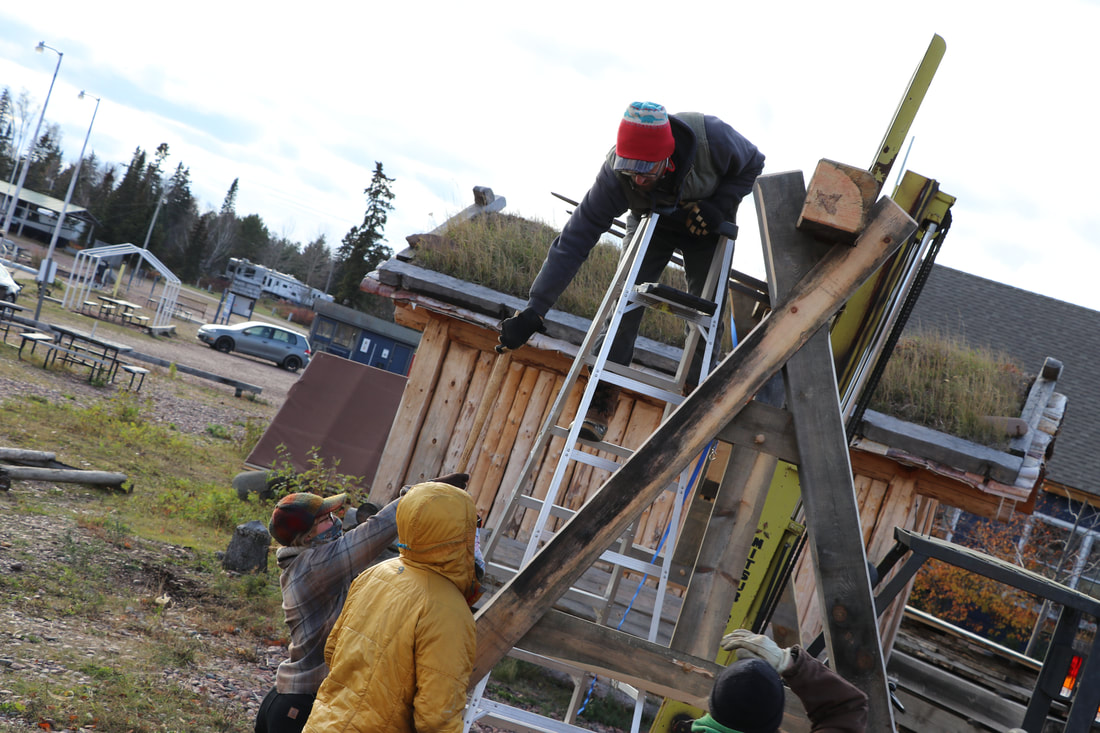 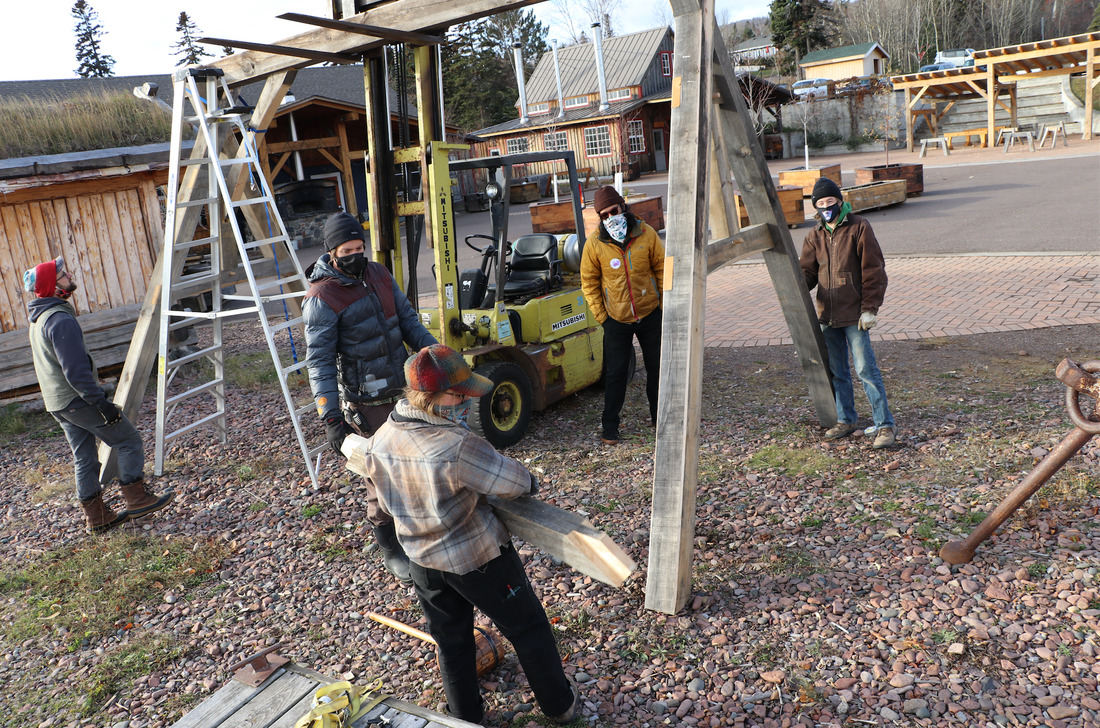 If you wander down to campus today, you will find the swing set standing on the rocky shore next to the Skjelter. You will see two red wooden swings attached to the beam with eye bolts and quick links. If you approach the swing, you’ll notice ripples carved into the surface of each seat like wind across the lake, arrows pointing in both directions. Take your pick. When you sit down you’ll start swinging slowly. Your hands will curl around the rope where it weaves back into itself then tapers into a single line. You will move while at rest. You will look out at the lake while swinging as high as you want for as long as you wish, and maybe someone will come swing beside you. 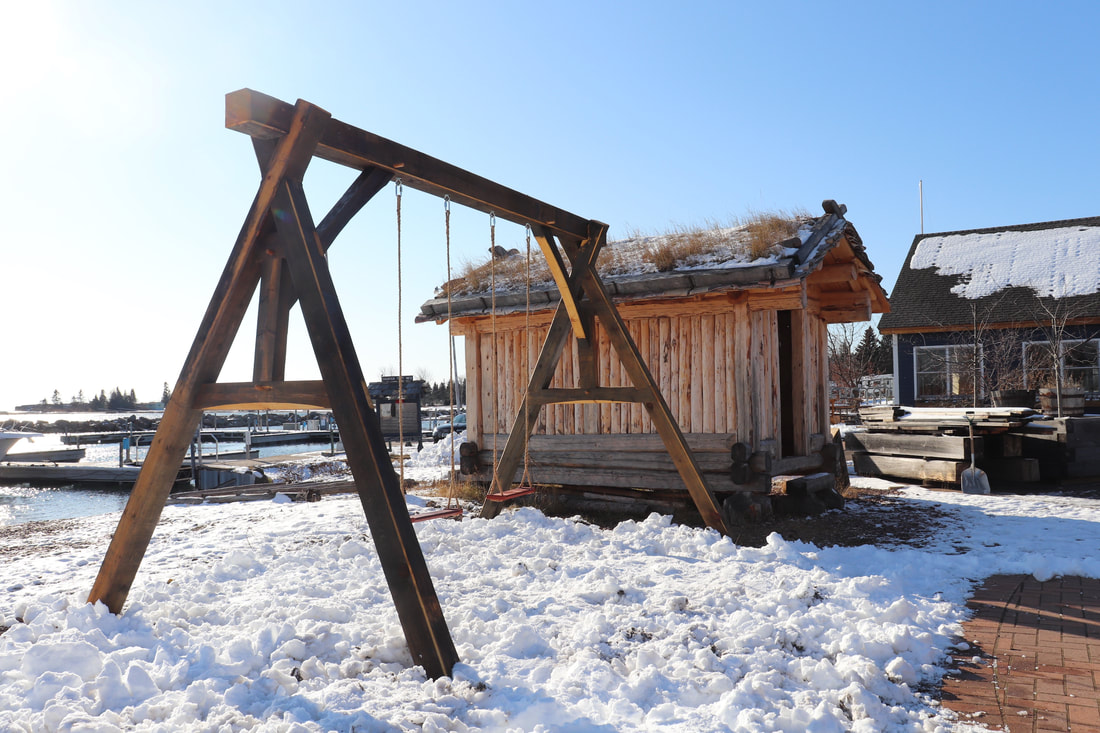 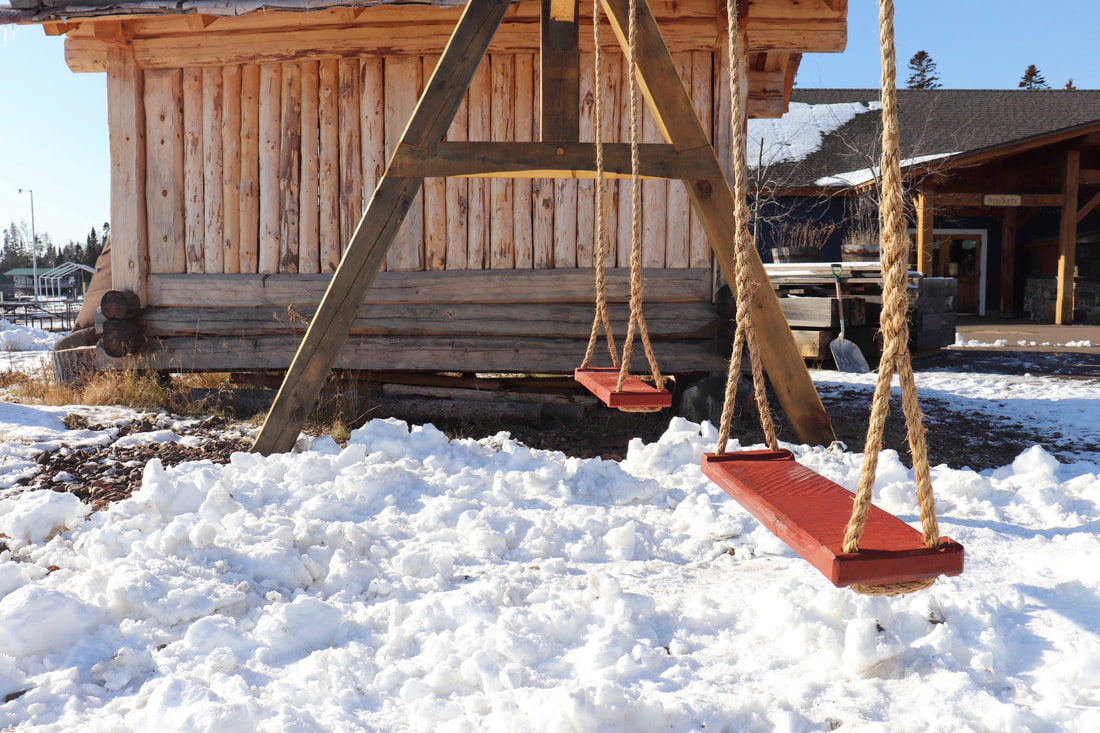 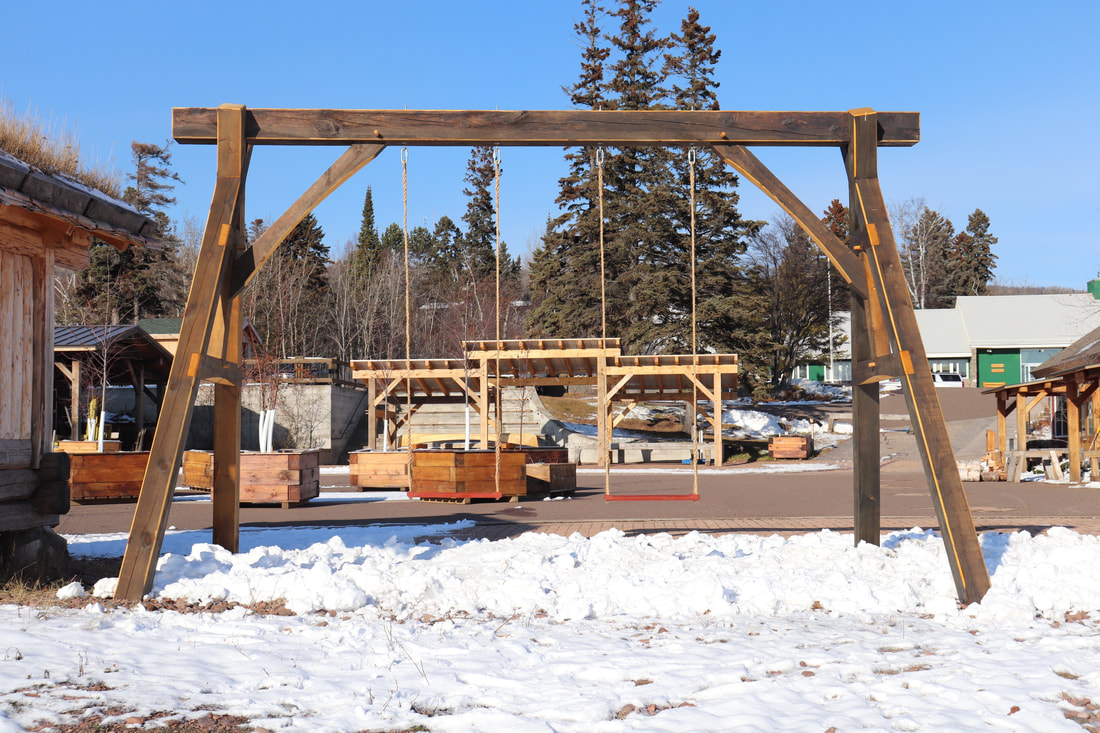 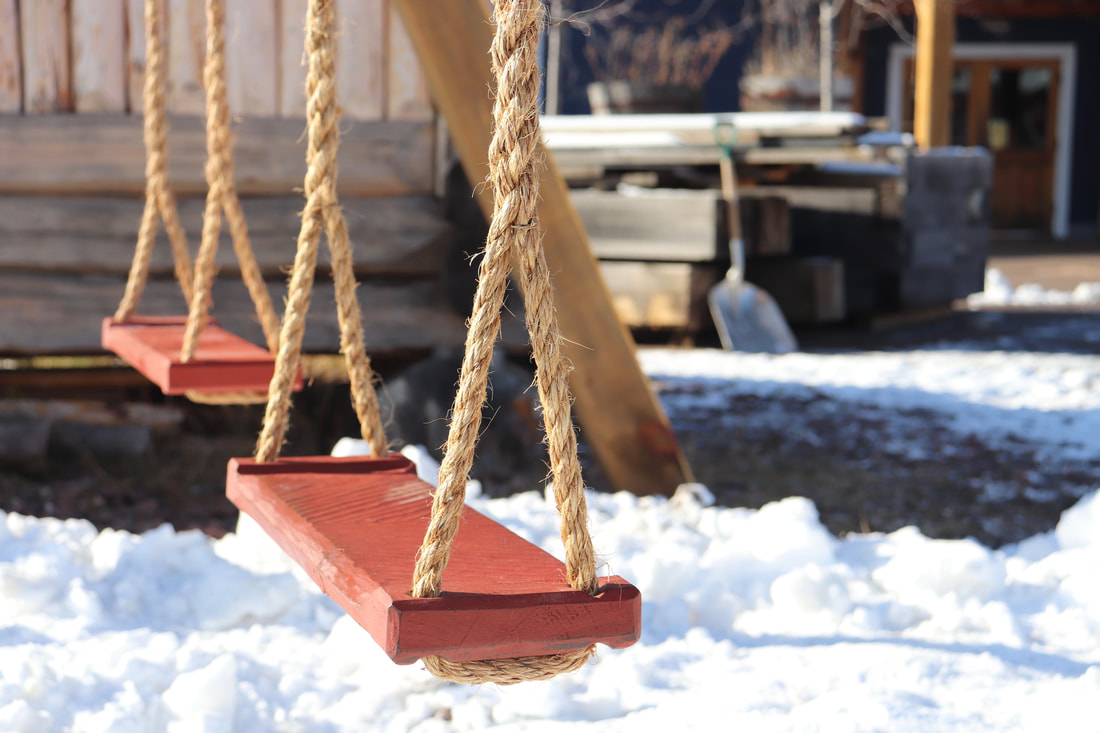